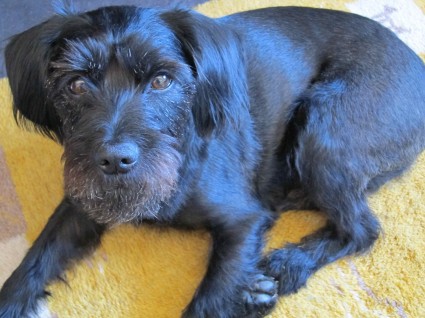 Does your dog have fatty lumps? These can be worrisome until they’re diagnosed as being  benign.

About 6 years ago Tom developed a lump on his right side. I was quite worried about it until the vet took a sample using a needle and tested it. He confirmed that this lipoma is pretty common in dogs and it is really nothing to worry about. About a year later, when he developed another lump, this time on his opposite flank, I decided to do a bit of research into why he may be developing these and what can be done about them.

Referred by a friend, I read Four Paws Five Directions : A Guide to Chinese Medicine for Cats and Dogs by Cheryl Schwartz, who discusses how various injuries and holding patterns in cats and dogs can produce ‘stagnation’ or blockages in energy. It seemed like there could be a link between Tom’s lumps and his muscle injury, described in a previous post, and some general holding patterns in his body. I noted that his right side lump was located in relation to his liver meridian. Later, I noticed that Tom had also developed a small node in the joints of his back leg and front leg corresponding to tightness in ligaments  that the vet had pointed out in a previous visit.

We went to see Kathy Kramer, a new vet at our veterinary centre who practices tradition chinese medicine. She confirmed that according to TCM, the lumps are associated with blockages and can be treated. She prescribed a TCM herbal formula that was primarily for liver support, and she performed a few acupuncture treatments. She found the places and meridians where Tom seemed to be lacking energy flow and treated these. She also did a procedure called ‘circle the dragon’ where she gave brief needle insertions around the lumps. I noticed that Tom was very relaxed after these sessions, and any muscle tightness was relieved for days afterwards. In addition to these treatments, I learned how to give Tom regular massages, particularly along his spine and on his joints on the legs in question. Even though he objects if he is a bit sore, he does relax into it and finally enjoys these moments.

After a few months, the lump on Tom’s right side diminished considerably! I’d say by about 80%. The one on the left side is smaller, by about 30%, and still shrinking. I am still giving Tom massages and this seems to be keeping any new lumps from developing. I’ve started using a massage technique called Tellington TTouch which I will elaborate on in a later post, but I do now believe that acupuncture and massage can relieve any muscle tightness, and stagnant energy which can cause the lipomas.

Now, Tom even asks for massage by sitting down and presenting his back to me! He, and I, enjoy this daily bonding ritual.