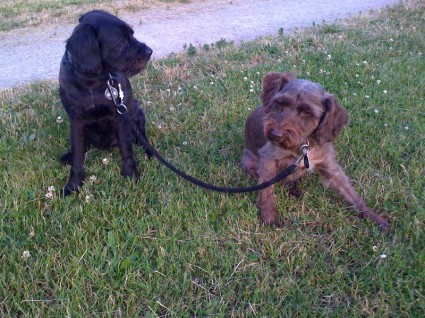 Sugi has always been afraid of our outdoor fireplace with its crackling wood. We’ve tried talking to him, or hold him on our laps but it doesn’t help much.  He still shakes all over in fear!  Tom doesn’t have a problem and is relaxed around the fireplace. Following  a lesson from Cesar Milan, one evening we connected Sugi to Tom using a short leash. Sugi calmed down immediately! He stopped shaking and even lay down in front of the fire and relaxed! 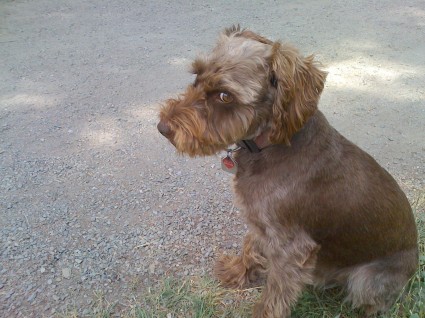 Story: One evening a few years ago, Greg took Tom and Sugi for a walk up to the grocery store on Commerical Drive. It was a regular thing we would do, blending a walk with the utility of grocery shopping. If Greg or I went on our own, we would leave the boys outside the shop while we picked up what we needed. Generally, they would wait outside patiently, sometimes shaking a bit with uncertainty.

On this particular spring evening,  it was abnormally windy. While Tom and Sugi were waiting outside the shop, the wind gave a sudden gust and knocked over the sandwich board next to them, startling Sugi. Panicked, he ran out into the middle of the road at full speed heading northbound down Commercial Drive, in the direction of home.

Noticing that the dogs were no longer standing outside, Greg hurriedly left the store. People pointed in the direction of Sugi, and he noticed that passersby ran out to help Sugi and stop traffic so that he wouldn’t be hit. (I am very grateful to the people who assisted a small frightened dog!) Greg was able to catch Sugi who finally slowed down enough to pay attention to his calls.

After that incident, Sugi refused to come within a block of Commercial. Somehow he knew all the streets surrounding Commercial we could not fool him by taking an alternate route. He would freeze and no amount of coaxing or leash pulling would help.

For weeks, I tried different tactics. Anger and frustration were the least effective. Finally, I thought about using treats. By bringing along his favorite treats I could at least get his attention and distract him from the fear. Somehow I figured out that I needed to ease up on his leash when he started to balk, I’d walk ahead of him a few feet, then squat down and call him. He would come, receive a treat and lots of praise! I would do this all the way up the block to the Drive, often taking 10-15 minutes to progress a hundred yards. Patience paid off and he managed to overcome his resistance and fear. (Cesar Millan always advocates for no tension on the leash!)

Turns out that Sugi was also scared of things along the street: sign boards, metal grates in the sidewalk, mailboxes, newspaper boxes. The incident with the sandwich board seemed to have sensitized him to unknown objects. When he stopped before an object and refused to move, I would slow down, even stop and let the leash go completely slack. Sugi would then trot along past and resume his walk. He seemed to be saying “just give me a minute while I make sure it’s safe…OK”. We would give him loads of praise!

Sugi is much more confident now. He’ll even walk over a metal grate in the sidewalk! He’s a persistent and courageous character at heart, desiring to move forward beyond fear. 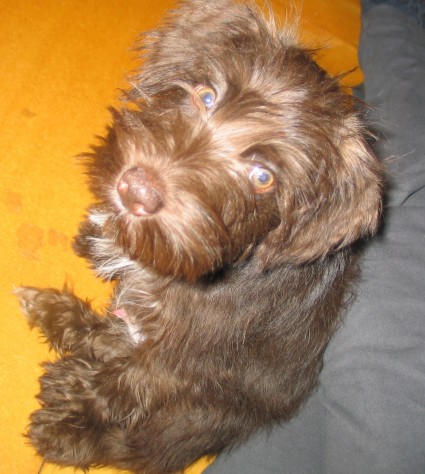 Story: Around Christmas Day 2005, we were walking along 4th Avenue and came across a pet shop called Urban Puppy (it’s no longer there thankfully). There were some puppies in the window. The largest puppy had red-brown fur and was beating up on his younger sister. Greg and I both exclaimed about how much he looked like Tom as a kid!

The next few days I pestered Greg with comments about the puppy and how much Tom would appreciate a friend. On the one hand I felt that it would be the right thing to do to get this puppy for Tom (and I), and on the other I felt cheated that I had been so obviously sucked-in by the puppy-in-the-window trick. These conflicting thoughts would effect me in a more profound way later on.

On January 2, 2006, we went into the store and the sales person asked if we wanted to hold him. I used some hand sanitizer they gave me, so as not to spread germs to the pups, and received him into my arms. I was struck by the way he looked directly into my eyes without turning away and seemingly without fear. He did resemble Tom but had a different energy – a kind of silent thoughtful state. We loved his red-brown hair and felt he had a kind of Zen presence. We named him Sugi (the name of a Japanese cedar).

That evening we brought him home and Tom immediately showed him who’s boss. On reflection, this introduction to a new home and a strange dog could have been handled better (see Cesar Millan‘s tips on raising a puppy). When he wanted to play, Sugi would tease Tom and then leap underneath the sofa to hide. This tormented Tom who barked and barked! For weeks, Tom generally protested Sugi’s presence.

After some time we noticed that Sugi was scared of objects, open spaces and loud sounds. We tried to make him feel more comfortable by giving him a kennel to rest in. We also noticed that, unlike Tom, he didn’t really feel comfortable cuddling with humans. He seemed to be uncertain about relationships with other beings.

The fear of objects and sounds continued for years with Sugi and we had to work with him regularly to get over many of these fears. Unlike most dogs, he also has to work harder in social situations.

Over time I learned about pet shops that sell animals, and puppy mills that use inhumane techniques to breed dogs. These are unethical industries and patronizing them only encourages these types of businesses.

We speculate that Sugi may have suffered as a small pup – probably from coming a puppy mill environment. Some puppies are removed from their mothers too early and this can cause harm in their development.

We love Sugi and continue to learn from him about respect, trust and compassion.