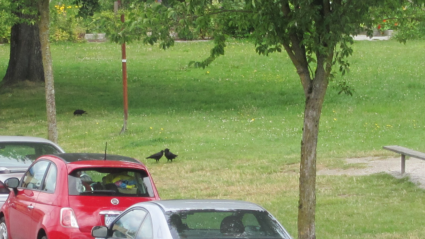 Yesterday morning there was a lot of crow activity on the corner of Woodland Park diagonally across the street from us. I could hear the adult crows—the ones who built their nest in the nearby tree—and their two off-spring from last summer. The adult crows called with excitement. I got up from my office chair to look out the window. The male adult was sitting on the baseball diamond fence scolding too-close people as they walked by. The two juveniles were walking around the lawn not far from the base of the tree that housed the nest (in the photo behind the red car).

Through the binoculars, I could see into the tree one of the crow babies perched on the nest’s edge. This year, the adult couple had a slow start with their babies. They had two nest failures; nests abandoned after damage from strong winds. They finally had success re-using a previous year’s nest in the tree at the edge of the park. The baby was flapping his wings, testing things out. The mother flew from the ground to the tree, over to the telephone wire, and back down to the ground. She seemed to be coaxing the youngster to make his first flight. The male kept guard, continuing to scold humans, while calling to the female. The juveniles walked around the grass pecking at things, seeming ready to provide back-up if needed. Juvenile crows may help their parents with nesting activities until they’re about 3 or 4 years old. This is how they learn to be parents themselves.

After the pedestrian and car traffic settled down, they stopped calling. Then, in this quiet moment, the fledgling swooped down from the nest onto the lawn. His first flight! The mother greeted him and regurgitated a bit of food into his mouth. Crows will prepare a mixture of food and saliva to feed their babies. This mix contains good bacteria for the babies health. I felt happy to have witnessed their group effort getting the baby launched! I went back to work.

After about 20 minutes, I heard the couple calling. The calls were coming from our roof. It was one of their typical calls caw-caaw—caw. The first and second caw paired with a slightly longer space between the second and third caw. The second caw slightly rounder sounding. I went up to the roof to give them their daily popcorn. Every day since their eggs hatched, I’d put a handful of peanuts and popcorn on the roof.

When I approached the edge of the deck I saw three crows, the two adults together on the neighbor’s roof, and the baby on our roof! He sat calmly and watched me put the food out. He had downy feathers on his chest and looked a bit ragged. His parents called a few times. I greeted the youngster and the parents. I felt honored—hello world! 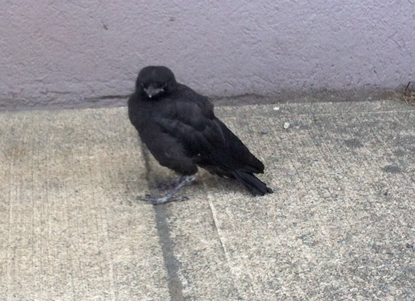 The traffic on Venables Street was busy as I walked up the north sidewalk on my way to Commercial Drive to get lunch at a nearby cafe. I noticed a crow standing on the sidewalk with his back to me. He was facing the wall of an industrial storefront. I stopped a few feet away and looked to see if he was injured. There were windows above the wall where he stood, so I wondered if he’d flown into one and was stunned by the hit. He stood quietly with his eyes closed as though sleeping. A woman came out of the shop and we chatted. She hadn’t heard him hit the window. Then, he opened his eyes and blinked a few times. They were blue, so I knew he was a young one. He had a short tail and looked a bit rough around the edges. He turned to me and gave a squawk. Just one. I called back and he stepped towards me. I looked around to see if there were any adult crows nearby, but couldn’t see anyone. I was hungry, but I didn’t want to leave him unsupervised. I feared he may wander out into traffic. I called Greg and told him about the crow baby. He offered to come watch and to bring a cardboard box in case we needed to rescue him.

When Greg arrived with the box and a towel, I called Wildlife Rescue Association (604 526-2747) and left a message as instructed by their answering machine. I went for food and Greg stayed behind to supervise. After about 20 minutes, a woman called back. She advised that this is fledging time for crows. Young ones will experiment with flight and forays away from the nest. She said it is normal for parents to leave fledglings on their own for up to an hour. She also asked to notice if he’s pooping. If so, it indicates that he’s not been abandoned and has recently been fed. She said to watch him and if after an hour no one comes to claim him, place him in a cardboard box and bring him in, or to Animal ER, the emergency facility in Vancouver where transport animals to Wildlife Rescue. 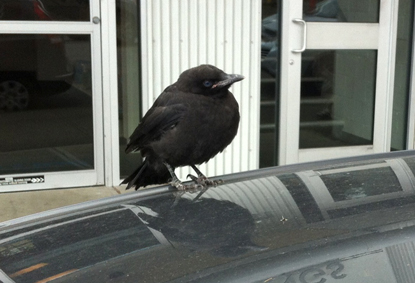 When I returned to join Greg, the little crow had wandered down the sidewalk and was looking at a glass door. Thinking his reflection was another crow, he tried to fly into the glass. After a few minutes he gave up and flew onto the roof of a car. We were now quite worried he’d fly into traffic. He may not have the skills to avoid the moving cars. We looked again to see if any parents were nearby. We saw a crow heading south across Venables, towards a tree a few hundred yards away. She flew inside the tree. She had a nest there. We couldn’t see the nest, but this kind of flight—to a destination deep in the tree—is an indicator of a nest location. We saw another crow fly north overhead. The young crow saw this one and called to him. I thought these must be the parents and that they were looking for him. It would be a good idea to move him away from the traffic and towards the nest. So we gently coaxed the crow off the car and towards the sidewalk. He swooped down and walked over to a storm sewer drain and looked down into it. He was probably thirsty. Greg slowly corralled him into a corner against the building where he scooped him up with the towel. We carefully put him in the box, removed the towel and shut the flaps. The fledgling protested by calling and rattling around while I walked with him across Venables and towards the tree.

I found a grassy bit about 30 meters away from the tree, and well away from traffic. I put the box on the ground and let him out. He walked over to a telephone pole, as though looking for cover, and stood beside the pole for a few seconds orienting himself. He called again, and this time the parents saw him. And me. The adult male, complaining, swooped down at me. I turned around and calmly walked away from the baby, simultaneously explaining the situation to the male. I didn’t want to harm the young one, but was trying to help him find his parents. Satisfied—that I had moved far enough away or had given a good enough explanation—he turned from me and flew up onto the telephone line just above the fledgling. I watched as the female joined the baby on the ground. She touched his beak with hers and reassured him with a few quiet words.