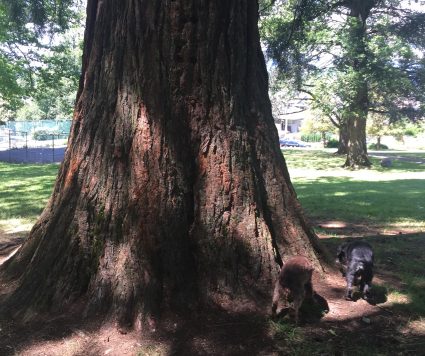 Walking up the hill to the grove, I breathed in the wonderful scent of cedar and fir, and felt the age of the trees. On Canada Day (July 1), Greg and I took Tom and Sugi to a park I had recently discovered while riding my bike.  Clark Park is the second oldest park in Vancouver (Stanley Park is the oldest), bordered by Commercial Drive on its east side, and sandwiched between 14th and 15th Avenues on its north and south boarders. It has a cleared areas for events, but more interestingly, it has a few of acres of old trees—cedar, fir, oak, chestnut, sequoia—on a hill gently sloping up to the east. Clark Park was donated to the Vancouver Park Board by E. J. Clark, and the trees there seem to be at least as old as the donation date of 1889. They are also some of the largest trees in the City.

We walked around the grove taking in the variety of planted trees, and the old-growth indigenous trees. I noticed a cedar at the edge of the Park that was brown compared to the green of the rest. This was a unhappy reminder of the imminent extinction of Western Red Cedars in the region. Climate change has created dryer conditions in BC, and this has resulted in large scale die-off of our beautiful native tree. Scientists say that this will be the species that will be first to disappear due to lack of moisture caused by global heating. 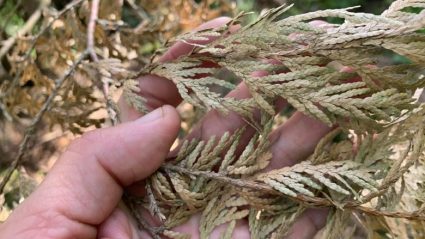 Make a trip to Clark Park to do some forest bathing, and to witness these large beauties. Also, next time you pass your neighborhood park, have a look at the condition of the cedars. 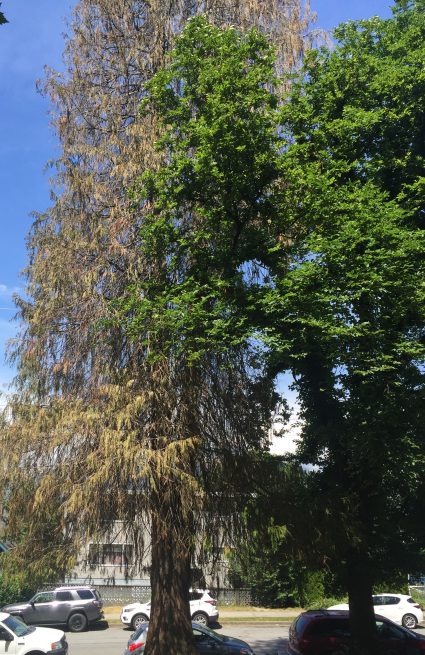