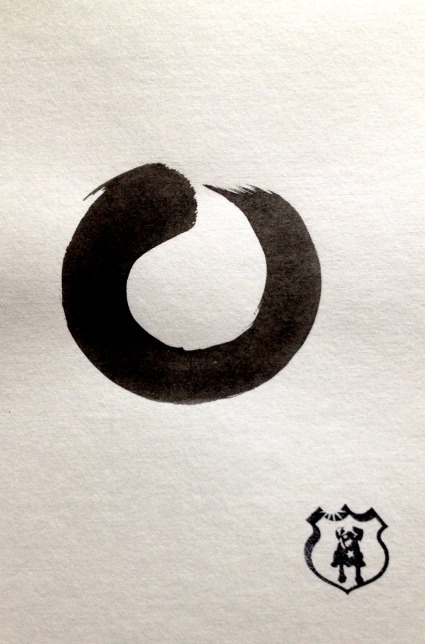 This post is Inspired by Robert Carter’s writing on Zen aesthetics ¹‚ ² specifically on enso sumi-e (ink painting) ³ and the energy of the brush.

Calligraphy and other Zen arts, such as landscape design, ceramics, tea-ceremony, and aikido are seen as a practice in self-culitivation; as forms of meditative practice towards cultivating a positive state of mind leading to compassion, benevolence and equanimity. One key aspect of Zen arts practice is that the mind become “unattached” so that the body can move freely with energy.

The image is a photo of a mark I created based on enso* (circle), a stroke traditionally made in sumi-e. I enacted an ‘enso’ session by meditating on mark making, with Sugi’s assistance of course. I made numerous marks trying out different relationships with energy, brush and mindfulness. The most successful marks had a represented energy, a balance of elements, and fluidity. I noticed that these ones were created when I did not think about controlling the brush, but instead focused on the energy needed.

I sent this one to my dear friend Sandra (who also designed the stamp image in the photo) as a birthday wish.

3. from wikipedia: In Zen Buddhism, an ensō (円 相 ), “circle” is a circle that is hand-drawn in one or two uninhibited brushstrokes to express a moment when the mind is free to let the body create.The ensō symbolizes absolute enlightenment, strength, elegance, the universe, and mu (the void). It is characterised by a minimalism born of Japanese aesthetics. Drawing ensō is a disciplined practice of Japanese ink painting—sumi-e (墨絵)“ink painting” . The tools  and mechanics of drawing the ensō are the same as those used in traditional Japanese calligraphy: One uses a brush to apply ink to washi (a thin Japanese paper). Usually a person draws the ensō in one fluid, expressive stroke. When drawn according to the sōsho (草書) style of Japanese calligraphy, the brushstroke is especially swift. Once the ensō is drawn, one does not change it. It evidences the character of its creator and the context of its creation in a brief, contiguous period of time. 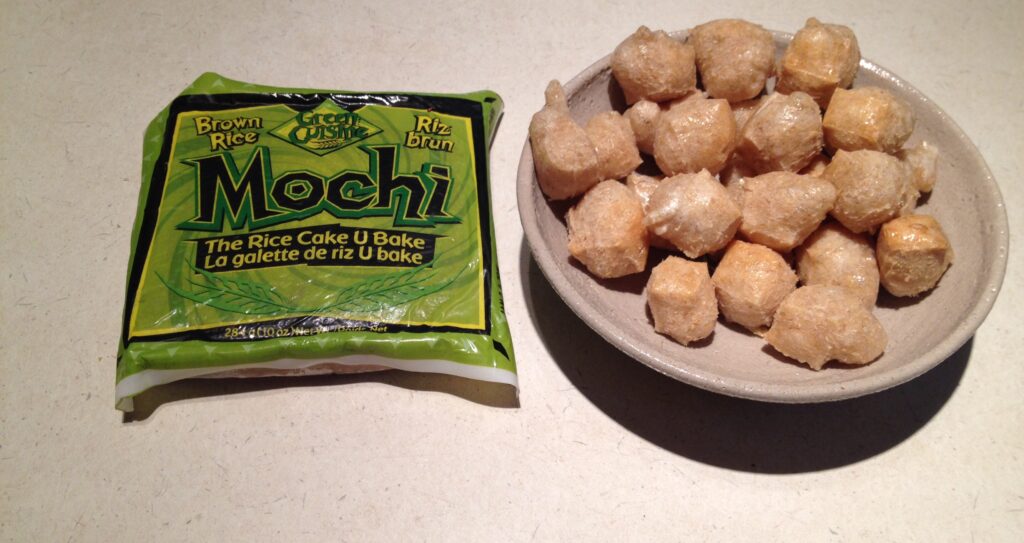 When Sugi was being picky about his food a few months ago, I searched for alternative treats that would be nutritious for him. I came across this product called Mochi by a vegetarian restaurant in Victoria called Green Cuisine. It is based on the Japanese food used for mochi deserts. The Green Cuisine mochi is made from organic brown rice only. It comes as a hard slab, and you can buy it from Capers or Whole Foods. You can freeze it if you need to. You prepare the mochi treats this way:

Preheat your oven to 375 F. Cut the slab into 1″ cubes and spread them out on a cookie tray (I use a pizza stone). Cook the pieces for about 10 min or until they puff up and brown a bit.  Let cool before giving to your dog.

I eat them dipped in salted olive oil!  They are puffy and crispy with a delicious softness on the inside. A nice gluten-free alternative to bread.

In a previous Rug Works post, I commented on Tom’s creative practice. Here are additions to his body of Rug Works. 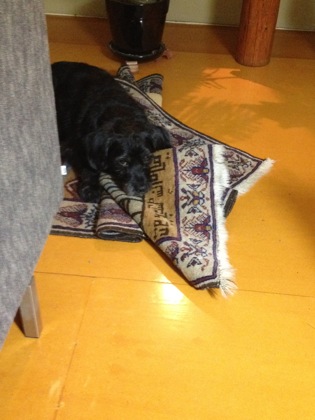 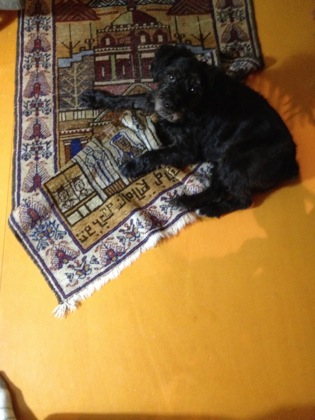 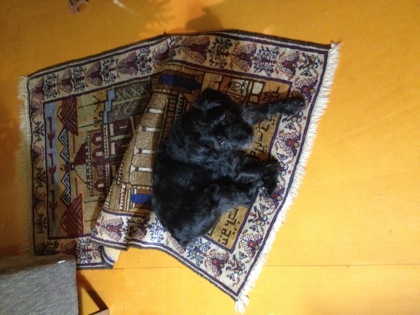 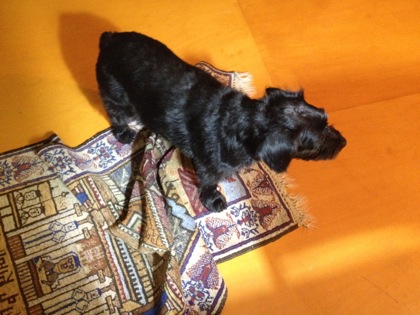 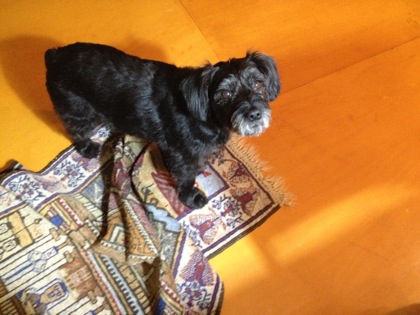 I modified the last pancake recipe to increase the protein content and to substitute sweet potato for the banana. I think Sugi likes the savory flavor of this one in comparison to the more sweet flavor of the oat/banana recipe. You can buy the lentil flour from Anita’s Mill or from Fairy Cakes. I learned from vegan chef Preet Marwaha, who spoke at the Vegan Congress Tasting on Jan 22, 2014, that you should soak your hemp or flax seeds for a few minutes before using them in the recipe in order to allow them to create a nice jelly like texture. Preet also said the omegas in hemp seeds are especially easy to digest. I added safflower oil because according to my vet it has the same omegas as flax oil which should not be heated.

Put the seeds in about 1/4 cup of your coconut milk and let them sit. In the meantime, put the flour and baking powder  in a bowl and use a whisk to mix up thoroughly. Put the sweet potato into the bowl that has the seeds/coconut milk and mash together until smooth. Add the mashed ingredients to the dry ingredients. Then add the coconut milk, whisking until smooth, and until you get the thickness you want. Add more coconut milk if you want. Use a spoon to put a dollop (about 1/8-1/4 cup) of batter onto an oiled pan. Cook until dry on the up side. Flip and cook the other side, just like you would regular pancakes! You may have to add a bit of coconut milk as the batter sets while you’re cooking.

You will see in the picture that I’ve cooked them as small (about 3″) grittle cakes on a special grill that spans two burners. Once done, I let them cool on a rack. Sugi (20 lbs.) eats about 6 of these per day (in addition to other lovely treats…). Unlike Tom, Sugi knows when he’s had enough… Delicious! 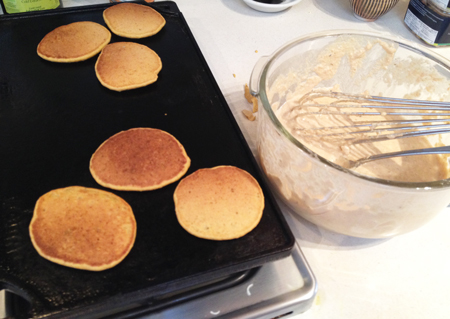 For some dog reason lately, Sugi has been very picky about his food. Things he used to love—squash, buckwheat noodles, rice noodles, azuki beans—don’t interest him right now. It can be frustrating offering  food and him turning his head away! I tried to entice him with various foods including goat dairy products, such as cheese and yogurt, and tofu. But after a week of these, I noticed he developed itchy ears and congested breathing, so I’m thinking he’s  allergic to dairy and soy products.

On a weekend over the holidays, I tried this vegan oat pancake recipe from Guten Free Vegan Girl for myself. These pancakes are delicious! They are even better cooked as waffles! Oats, the type of flour used in the recipe, are one of the most protein-rich grains with 17% protein compared to rice which is 7%.

I adapted the above recipe for Sugi by substituting the apricots (too sweet for him) with banana and adding some veggie puree. The pancakes do not have any sweetener, and they are full of protein, fruit, veggies and omegas so I believe they are a nutritious meal:

Put the dry ingredients in a bowl and use a whisk to mix up the flour with the baking powder. Put the other ingredients (except the coconut milk) together in a small bowl and mash until smooth. Add the mashed ingredients to the dry ingredients. Then add the coconut milk, whisking until smooth, until you get the thickness you want. Add more if you want. Use a spoon to put a dollop (about 1/8-1/4 cup) of batter onto an oiled pan. Cook until dry on the up side. Flip and cook the other side, just like you would regular pancakes! You may have to add a bit of coconut milk as the batter sets while you’re cooking.

You will see in the picture that I’ve cooked them as small (about 3″) grittle cakes on a special grill that spans two burners. Once done, I let them cool on a rack. Sugi (20 lbs.) eats about 6 of these per day (in addition to other lovely treats…). He seems satisfied and is not losing any weight, so I’m happy… Delicious!